We are honoured to present the 2019 President’s Award to the Honourable Madam Justice Abella of the Supreme Court of Canada for her contribution to the legal community, commitment to the promotion of women in law, and advancement of equality and diversity in the legal profession. 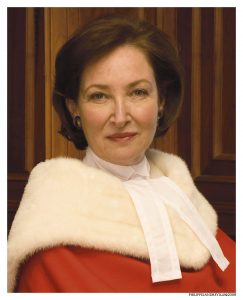 Justice Rosalie Silberman Abella was appointed to the Supreme Court of Canada in 2004 and is the Senior Judge on the Court.  She attended the University of Toronto (BA 1967, LLB 1970).  She was called to the Ontario Bar in 1972 and practiced civil and criminal litigation until 1976, when she was appointed to the Ontario Family Court at the age of 29, the youngest and first pregnant person appointed to the judiciary in Canada. She later served on the Ontario Court of Appeal for 12 years.  She chaired the Ontario Law Reform Commission and the Ontario Labour Relations Board. Justice Abella was the sole Commissioner and author of the 1984 Royal Commission on Equality in Employment, creating the term and concept of “employment equity.” She was the Boulton Visiting Professor at McGill Law School from 1988 to 1992, where she taught jurisprudence, administrative law, and constitutional law. She is a elected a Fellow of the Royal Society of Canada, the American Academy of Arts and Sciences, and the American Philosophical Society.  She is a graduate of the Royal Conservatory of Music in classical piano, was a judge of the Giller Literary Prize, has written over 90 articles, and authored or co-edited four books on a variety of legal topics. Justice Abella chaired the Rhodes Selection Committee for Ontario and is a graduate of the Royal Conservatory of Music in Classical Piano. She has 39 honourary degrees.

She is married to Canadian historian Irving Abella: They have two sons, both lawyers. She is the first Jewish woman and the first refugee appointed to the Supreme Court of Canada.

Student and Young Lawyer Award Recipients will be announced soon!

The WLAO President’s Award recognizes a woman, firm or organization who has made a substantial contribution to the legal community and as a recognized leader, demonstrates a commitment to the promotion of women in the law: engaged, aware and connected to issues, substantive and personal, facing women in the legal profession today.

This year we are introducing the new Chappell Partners LLP/June Bushell Award! This award acknowledges a lawyer who, like June Bushell, experienced and overcame adversity in pursuing a career in law and, despite that adversity, is making a positive contribution through her legal practice. The award is open to female lawyers with 5 or more years of practice. The recipient will determine to which registered charity a donation of $1000 will be made in her name.

Sponsorship Opportunities are available for this program – show your support! Click here.

At the Award Gala, WLAO will also recognise the winner of the 2019 WLAO General Counsel Chapter Award and we will present our partnered student awards to five remarkable women:

We hope you are joining us at our celebration honouring fantastic women and their remarkable accomplishments!

Thank you to our Award Partners: 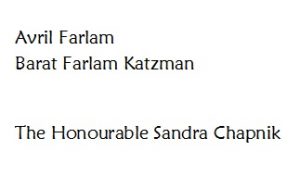 There are no refunds within 7 days of program date.